At it`s core the legend of the Demidoff Princess is a tale of good old greed and craving for money.

The legend of Père-Lachaise is a rather interesting one as it is based on a couple of true facts. That`s why I think of it as an urban myth rather then a legend.
It all started around 1880 when some newspapers began running a story about a Russian princess who would leave a fortune to the person who would stay inside the chapel on top of her tomb for a year and a day. 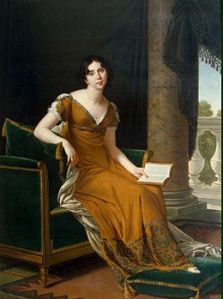 It was reported that the princess was inside a glass coffin and that to make sure that her companion would see her at all times, the walls of the chapel had all been covered with mirrors. The only thing he or she was allowed to do was read.
There should be no contact with any living soul, not even the servant who would bring food on a daily basis.
Now this weird bit of news got picked up by foreign newspapers and started circulating around the world. Soon, the director of the Père-Lachaise Cemetery received letters from everywhere, from people who wanted to take up this challenge and stay in the tomb.
Quite a few of them were women.

Both the text and the reaction to the myth were analyzed by Frédéric Ortoli and his opinion on the matter can be found in his “La Tradition” [a magazine he kept, pertaining folklore, legends and superstitions]. According to him, the legend was fueled for so long and even picked up in other countries because it was linked to the human fear of being buried alive.

Mausoleum as presented on paranormal site

It is as if the princess wanted to make sure that if she ever were to be buried alive then someone would be there to help her upon her awakening – hence the glass coffin and all the mirrors.
Almost all agree on the fact that the Russian Princess was in fact Lady Demidoff [born Stroganoff] who died in 1818. Her exact title remains unclear… some refer to her as a Baroness, some say she is a Countess and others refer to her as being a Princess.
But the Demidoff tomb doesn`t fit the description in the news. In stead there is another in the 48th division of the famous cemetery that resembles the one in the legend. It belongs to a rich family from Provence – the de Beaujour.

The legend resurfaced in 1894 with an added twist. It was said that all that attempted to complete the task either gave up or went insane. Hauntings were reported and some even claimed that the princess is a vampire.
To that end, many have analyzed the symbolism on the Demidoff tomb and came to the conclusion that it is a “center for vampiric activity”. Everything was taken into consideration and given a special meaning… starting with the exact date of her death [8th of April 1818] that contains the number “888”, to the supposed orientation of the tomb and the engravings on it [a lot of Egyptian symbols, bats and wolfs].

I cannot tell you at what point it turned into an urban vampire legend, but the legend of the Demidoff Princess continues to fascinate to this day.