“Love and Pain” was given to the world by Edvard Munch in 1893 and there are six versions of the work created between 1893 and 1895 – most of them currently in museum collections.

Despite “Love and Pain” being most recognizable in the above version, he also painted derivatives in later life, using various methods.
The painting shows a woman with long flame-red hair kissing a man on the neck, as the couple embrace.

The painting was first called “Vampire” by Munch’s friend, the critic Stanisław Przybyszewski.
He first saw the “Love and Pain” on exhibition and described it as “a man who has become submissive, and on his neck a biting vampire’s face.”

One of the other versions bares the name “Vampyr II” and is actually a woodcut with a very similar theme and composition, created by Edvard Munch in 1985. 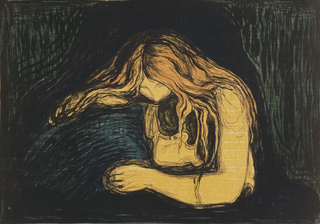 Another interesting fact is that a 1894 version of “Love and Pain” was sold in 2008 for an impressive $38.2mil making it the most expensive Munch painting auctioned – to date.