Wiedergänger is German for “one who walks again” and the term is linked to various types of haunting activities, poltergeist phenomena and generally zombies. It is more an energetic vampire than a blood thirsty one – and a wiedergänger is usually viewed as a spirit, rather than a corpse. 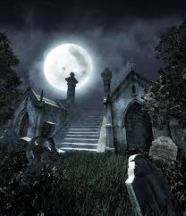 Up until the early 20th century, the spirits of the dead were believed to be able to exercise a disastrous influence from the grave via a telepathic link with their living relatives – and this wiedergänger was usually stuck until its unfinished business was resolved.

The most common way to get rid of a wiedergänger was via prayers by the church or special rituals at the grave – also performed by priests.

Note: Another form of the physical wiedergänger is the headless rider that, frequently mentioned in West German legends, entered into world literature and even into the history of film through the American poet Washington Irving and his novel The Legend of Sleepy Hollow.