As established in the previous articles added on the site since, we can clearly link the vampire panic that took hold in New England in the 1800s to the periodic epidemics of tuberculosis that would wipe out entire families in those days.
More often than we would like to believe, the communities would decide on exhuming the bodies of those believed to be vampires and they would approve the families carrying out gruesome rituals in an attempt to save those members that were tormented.

Such was the case of young 20year old Frederick Ransom of South Woodstock [Vermont].
He died on the 14th of February 1817 and was soon suspected of becoming a vampire. What is unusual is the fact that he pertained to a “well-to-do” family and you would expect them to be less inclined to give in to the superstitions of the old world. 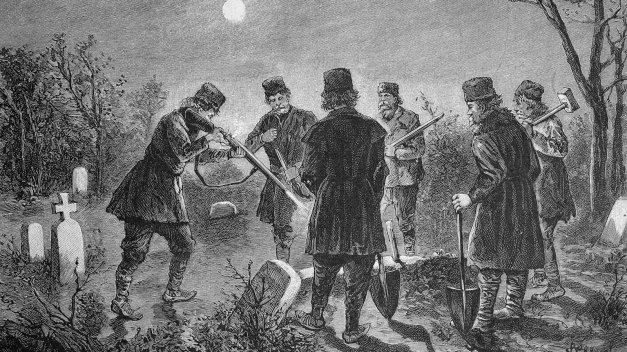 He was exhumed and the customary rituals were performed on his body – we are given the extra details that his heart was burnt to ash in a blacksmith`s forge under the gaze of numerous members of the local community.
As the news made its way in the newspapers of the day so did Frederick`s story come to be passed on.

The savage in man is never quite eradicated. I have just read of a family in Vermont—who, several of its members having died of consumption, just burned the lungs & heart & liver of the last deceased, in order to prevent any more from having it.

It would take a couple of decades before the proper treatment would be discovered for what was then known as consumption.

Turning to Wikipedia we find the following note on the article pertaining to the vampire hysteria in New England:

Dr. John Clough of New Ipswich, reported in “The Influence of the Mind on Physical Organization” in the Boston Medical and Surgical Journal Volume XXI (1840): “In connection with [these superstitions], I cannot omit to mention a circumstance which occurred in this town (New Ipswich), not thirty years since, and similar occurrences probably occurred in many other towns in New England. This was disinterring a human body, which belonged to a family all strongly predisposed to consumption, for the purpose of removing the heart, which was burned, the ashes of which were considered a sovereign remedy to those of the family who were still living, and might be afflicted with the same disease. This only illustrates the fact that those elements of character which held such a magic sway over the minds of men in ancient times, have not ceased altogether to influence the community in our comparatively enlightened day.”

We are not given a name for the resident that was exhumed and as a time-frame we can place the event as taking place sometime around 1810.

The picture described is similar to that of the other cases from the vampire panic in New England.

As with other cases from that region, we are talking about an outbreak of tuberculosis where the first family member that dies from the disease is exhumed because he was labeled a vampire and the community rallied together in order to save the remaining members of the family.
The rituals are performed in the dead of night and no further details are provided with respect to this case.

The great part about having town records is that you can always consult them and find incredible facts about the people that used to live in your neighbourhood.
In this particular case the documents allowed us to as far back as the time when Scioto County [Ohio] was settled, back in the 1800s.

We are treated with the following article:

The family of Philip Salladay came from Switzerland, bought and settled on a lot in the French Grant soon after the opening of the country for settlement. Hereditary consumption developed itself in the family sometime after their location in Scioto county. The head of the family and the oldest son had died of it and others began to manifest symptoms, when an attempt was made to arrest the progress of the disease by a process which has been practised in numerous instances, but without success. They resolved to disinter one of the victims, take his entrails and burn them in a fire prepared for the purpose, in the presence of the surviving members of the family. This was accordingly done in the winter of 1816–17, in the presence of a large concourse of spectators who lived in the surrounding neighborhood, and by Major Amos Wheeler, of Wheelersburg. Samuel Salladay was the one they disinterred and offered up as a sacrifice, to stop if possible the further spread of the disease. But like other superstitious notions with regard to curing diseases it proved of no avail. The other members of the family continued to die off until the last one was gone except George.

Based off the way the text is worded I got the feeling that they were trying to make a distinction as to the family being foreigners that had settled recently and the sidenote that they had a predisposition for consumption [aka tuberculosis].
We also get details about what happened after the ritual was performed on Samuel – his family sadly continued to suffer from the diseara and apparently died off.

This is a case that was not around the web 10 years ago when I started my original blog [yeah, yeah…had an original vampiresrealm in Romanian back in 2010 xD ] so I was excited to dive into the research for this one. As far as I can tell this account is still so fresh that it is not 100% defined and it even has a few twists… plus a controversy or two 😉
While Sava Savanivic is one of the most well known vampires from Serbia there is a bit of a debate going on as to whether or not he is also the oldest one. Personally I am of a mind that the oldest strigoi of the region is Petar Blagojević [aka Peter Plogojowit] as he is documented in 1725 by the Habsburg officials and the legends pertaining to Sava did not surface untill the mid 1800s.

So here is what we know… according to the folk tales
Sava Savanovic was a miller in the village of Zarozje and he was in charge of an old watermill on the river Rogačica. Not much is known about his life so we can take it that he had a long and peaceful time that was not flourished even after his legend started to gain track.
All that we are given is that he died in the mid 1700s and that two curious wounds were observed on his neck. As the vampire hysteria had not reached their remote area yet, the villagers buried their old miller according to the usual customs and not much happened in the immediate aftermath.
The mill itself came into focus in the sense that its upkeep was not picked up by someone else and it slowly started to decay. As the years passed the villagers came to believe that the abandoned mill was cursed and they started to avoid the area – deeming it a dark and cold ravine.

As the people started to feel the economical misgivings of the forced closure of the mill, they started to look for solutions to reopen the site.
Enter a pair of lovers that did not have the blessing to wed and a father that required the young lover to make something for himself before he could be taken into account as a husband prospect!
The two remain unnamed [makes me think that it is a flourish] but it is mentioned in so many sites that I decided to go with it – and it is said that their love was so powerful that it made the young man ignore the folklore and take up the position in the decrepited mill.
By now it was the mid 1800s and as he started to repair the mill it would stand to reason that he disturbed old Sava – both the new miller and various villagers started to complain from nightly visits that would leave them drained of energy for the following day. As the vampire hysteria was now in its bloom it was soon concluded that Sava Savanovic was responsible and he was dug up for the necessary rituals to be performed so that things could go back to normal.

As advised in the beginning of the article, there are a couple of folk twists in this case. The main one that I will be covering pertains to the idea that the soul of the dead can be seen at the moment of death exiting the body in the form of a butterfly. However, should said butterfly happen to be yellow it was taken as a sign that something nefarious was happening.
In this twist we are given the additional information that Sava died in the presence of a couple of his friends who noticed a yellow butterfly exiting his mouth soon after. Years later, when the hype about the revisiting Sava was on everyone`s mind, many villagers claimed that there were a lot of yellow butterflies about.
When the vampire was dealt with, again a mysterious yellow butterfly exited his mouth but no one gave it much importance.
A little while passed and the young man managed to save up enough money to present himself in a better light, however when he arrived at the house of his intended he discovered that she had recently died – he walked into the mourning room he noticed that a yellow butterfly had just entered her mouth. 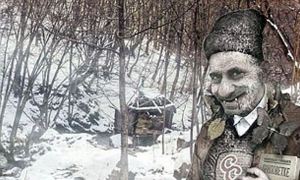 Note: Sava Savanovic and this particular twist is actually mentioned in the novel “90 days later” written by the Serbian realist writer Milovan Glišić who is believed to have taken the story out of folklore almost in its entirety.
In 1973 there was a horror film called “Leptirica” inspired by the story – the first Serbian horror movie that remains a staple for the genre to this day.
Sava is also featured in the novel “Fear and his servants” written by Mirjana Novaković.

The Vlasenica vampire incident is mentioned in a couple of local records and was thus picked up in the feverish decades of “vampire craze” that followed the publishing of “Dracula”. Vlasenica is a town in the Serbian part of Bosnia Herzegovina, situated somewhere between Sarajevo and Zvornik.
A young man died in 1906.
Shortly after, his wife got ill as well. She insisted that her dead husband had visited her during the night to drink her blood.
He had become a Lampir (obv. it is the regional word for Vampire) so the terrified neighbors asked permission to dig up the dead man in order to decapitate and cremate him.
Their request was turned down by the authorities and the panic continued in the village. The vampire of Vlasenica made a total of 15 victims before he was eventually dug up and dispensed with in the usual / ritualistic way.