Be it because you find the legend of Dracula fascinating or because you are simply looking for an amazing place to visit in Romania, Bran Castle is an excellent choice!

Complete with breathtaking sights from the higher points of the castle, narrow hallways with arrowslits and oval staircases that you have to mind your step on

The museum has verious items pertaining to the private collections of its owners [such as furniture pieces and a few art pieces] and it is a genuine treat to see prop costumes from historical movies shot in the communist era by renound director Sergiu Nicolaescu and items from the 1992 adaptation of “Dracula” You are also in for a surprise on the 4th floor of the museum as you are introduced to a series of myths and folk tales from the region – bonus: the earye atmosphere gives it even more of a goth kink 😉
๑۞๑ Related:๑۞๑
† Dracula vs. Dracula

Bran Castle – the reason I am here again after a 3year break.
So let me tell you the story of how I got infected with COVID, started to feel myself spiral into a bit of depression while in quarantine and then decided to reclaim the site domain and start writing about vampires again.

View from the way up to the castle entrance

Most people associate Bran with Dracula because of the description provided by Bram Stoker for the castle where Jonathan Harker makes his business trip and encounters count Dracula.

The details don`t quite match up, however we are talking about a fantasy novel not a historical one so we will overlook the inconsistencies for the sake of a brilliant piece of gothic literature and a splendid castle that is 100000% worth visiting 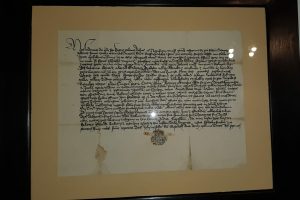 The link between the castle and the family of Vlad Tepes dates back to his grandfather.

It was November 1377 that the permission was granted by the king of Hungary for a new fortification to be built on the border between Transylvania and Wallachia.

After its completion, Bran castle became the border fortification that handled both the taxation for the road that linked the two regions and garrisoned the small regiment that maintained the peace in the area.

The year was 1395 and Sigismund of Luxembourg [German emperor and king of Hungary] used Bran castle as a strategic base for an incursion in Wallachia, imposing on the throne his vassal Mircea cel Batran [Mircea the Old, grandfather to Vlad “Dracula” Tepes]. 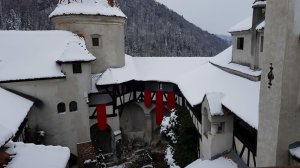 View from side tower

In 1407 the management of Bran Castle was awarded by Sigismund to his vassal and it remained so until 1419. It was at Bran that both Vlad Tepes and his father Vlad Dracul were stationed during the periods of time that their family was not entrusted with the throne of Wallachia so we can attribute the military experience that Dracula got from these campaigns and the time he spent at the Ottoman court as a prisoner of the Sultan. 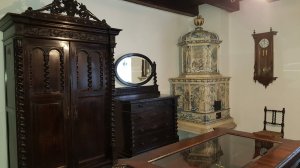 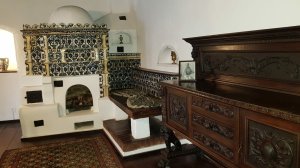 Note: These photos were taken on 14 Jan 2021 on my trip. The Xmas decorations were still up in the region ♡ I leave you with my favourite photo taken at Bran, starring the Xmas tree.

Q&A: Why did Stoker place Dracula in Transylvania not Wallachia?

Q: Why did Stoker place Dracula in Transylvania not Wallachia?

[Dear Katerina,]
The exact answer to this question is a mix up made by the bishop of Prague. In his 1544 chronicle he listed ~Vlad Dracula~ as the ruler of Transylvania.

And now a couple of more info so that you`ll get the exact picture.
As already explained in my series about the historical Dracula, he wasn`t exactly loved by the merchants in the neighboring Hungarian cities of Brasov and Sibiu situated in… you guess it!!! … TRANSYLVANIA!
This was mainly because Vlad pretty much closed down the trade with them by creating 3 trade centers on the border with Wallachia and essentially told them not to “export” to his country. All their products were to be sold in large quantities and at fair prices so that the wallachian traders could do the rest [and the profit].
Needless to say this was not viewed kindly by the transylvanian barons and they started to write their king about “the evil Vlad Dracula”!
Enraged by this action, the said hungarian traders started to house rivals to Vlad`s throne in Brasov and Sibiu. Rather than making him more controlable, Vlad Dracula charged the regions and plundered them as punishment.
That is why we currently have so many bloody legends about Dracula.
Another thing that you might want to ponder on is that fact that in later part of the XV century the printer was barely invented! Despite it being such a rare and costly machine to employ, by the 1500s the whole of Europe was filled with brochures about the “odious” Vlad the Impaler!
So much money spent to make sure that Dracula wouldn`t get any support from any of the royal courts and to give Corvinus as excuse to keep him prisoner! 😉
Here`s a little list of the years so you understand how many brochures we are actually talking about and how long it took them to shape the myth:
– 1477: the oldest, appeared in the last year of his life and a copy is kept from the Lubeck edition
– 1491 in Bamberg
– 1494 in Augsburg
– 1499 in Nurnberg: we find one such edition in the collection of the humanist Hartmann Schedel
– 1520 in Strasbourg: the variations are so bizarre that this format barely resembles the original from 1477.
In conclusion: He was associated with Transylvania because that is where the lies about him started from.

NOTE: In parallel to these tails we also have the slavic stories that were circulating in the Romanian regions and the Balkans, depicting Dracula as a war hero that stood up to the turks. These are the stories that are made credible by the fact that Pope Pius II regarded Dracula as a valuable defender against the ottoman threat.

Although not the first work to present this kind of character, “Dracula” by Bram Stoker was the first novel to truly have success
The creative process wasn`t a spontaneous one, as many would imagine. It took decades to complete the novel, Stoker spending a great deal of time documenting in the British libraries.
The myths may have left their mark on Count Dracula – the character, but the notion of an aristocratic-vampire is a huge step forward! It became the first vampire character that managed to sneak in the collective subconscious, influencing even to this day.
Although Stoker’s vampire summarizes all available superstitions [up to that time], the character in itself brings a new and exciting twist: the undead is of noble origin and retains the title of Count.
The author thus creates a huge gap between the aristocrat Dracula represents and the corpses leaving their tombs at night to feed. The latter behaved more like the zombies in voodoo culture, while Dracula is endowed with intelligence and has other interests outside the “running” after blood.
The Count is able to plan the journey and even counterstrike some obstacles, avoiding difficult situations throughout the story and especially he allows for an evil character to be exposed by the [first] hunter: Van Helsing.

Even his image is a special one. He seems to be endowed in order to seduce his victims.
Traditional vampires used their powers to subdue victims, but Dracula is shown as a courtly gentleman, with good quality clothing – even manages to mimic life for a few days as his lawyer visits him to sign the contract for buying the future home in England.
The general image of a vampire is supposed to be complete with a shroud and / or semi-decomposed clothes, unkempt appearance [hair disheveled, broken nails because of numerous exits from the tomb] and blood – incriminating evidence around the mouth of any vampire.
We rarely find dialogues in the old stories, but we can not put too much emphasis on this because there weren`t so many writers [of short stories and novels] that focused on these issues ahead of Stoker. The classic poems present scenes of vampires and their victims [almost always undead relatives or lovers] without much dialog.
In the legends who inspired Bram Stoker, the vampire is a creature of darkness that shows a lot of negative aspects – that Irish has introduced in the description of Dracula. Associated with the shadows and night, the Church used the vampire to incite fear and it was considered a servant of the devil; the vampire was “kept out of the world by the light of God” during the day.
Unlike other mythological creatures, the vampire did not have duality before the changes made by Stoker! While in other cases demons behaved like normal people while the sun was in the sky [often taking the appearance of a member of the community], and after nightfall their monstrous side would manifest, the vampire spend the day in the cemetery, more precisely in its grave. The night was dedicated to hunting!
Stoker changed certain elements without changing the nature of his character.
Like other vampires, Dracula cann`t move during the day, but neither is he trapped in the cemetery. His coffin travels without major issues from Transylvania all the way to Britain -he even uses of his powers to subdue the will of the crew and changes the environment to his liking [causes fog and storm during the trip]. No other vampire before Dracula was so strong and had so many supernatural powers.
His duality occurs at nightfall, when he is both the courteous aristocrat who commands respect, and bloody and scary vampire, bringing more of an animal.

OK OK!! Here`s a song from me… the score from the Dracula movie starring Bela Lugosi. Featured in the 1931 movie… ENJOY!!!! – Swan Lake by Tchaikovsky

Yes, it`s only 1 song! Was a mute black&white film 😀
PS: Of course I don`t post music videos and lyrics… I`m more into other kind of articles 😀