Dante and Virgil is an 1850 oil on canvas painting by the French academic painter William-Adolphe Bouguereau. The painting depicts a scene from Dante’s ‘Divine Comedy’, which narrates a journey through Hell by the main character – Dante – and his guide, Virgil.

This painting was inspired by a short scene from the Inferno, set in the eighth circle of Hell (the circle for falsifiers and counterfeiters), where Dante, accompanied by Virgil, watches a fight between two damned souls: Capocchio, a heretic and alchemist is attacked and bitten on the neck by Gianni Schicchi who had usurped the identity of a dead man in order to fraudulently claim his inheritance.

Vampire by Marco Bucci is one of those images that sticks with you… and the more your look at it, the more you notice!
Decadently rich in details and subtones, this piece makes your imagination spring into action.

You might think that it is an actual 18th century painting, however the artist – Marco Bucci – is actually a contemporary of our 😉

What I personally find haunting about this piece is the fact that our vampire is in such a position as opposed to his victim (the lovely lady on the bed) that it makes you wonder if the attack has taken place or not.
Are we looking at moments BEFORE or AFTER a vampire feeding?

Lady Lilith is an oil painting by Dante Gabriel Rossetti originally painted in 1866 using his mistress, Fanny Cornforth, as a model. At the insistence of shipping magnate Frederick Richards Leyland, Lady Lilith was partly repainted in 1868 using the face of Alexa Wilding.
On 9 April 1866 Rossetti wrote to Frederick Leyland:

As you continue to express a wish to have a good picture of mine, I write you word of another I have now begun, which will be one of my best. The picture represents a lady combing her hair. It is the same size as Palmifera – 36 x 31 inches, and will be full of material, – a landscape seen in the background. Its color chiefly white and silver, with a great mass of golden hair.

The text that was attached to the painting, originally titled “Body’s Beauty” is in sync with that of another painting of Rossetti’s. He later renames the poem to “Lilith”
Find the poem –> HERE <–
Lady Lilith was donated in 1935 to the Delaware Art Museum where it is now displayed.

There are several copies pertaining to the painter.
A large 1867 replica of Lady Lilith – in watercolor and showing the face of Cornforth, is now owned by New York’s Metropolitan Museum of Art. The text that accompanies it is a fragment from Goethe’s Faust:

“Beware of her fair hair, for she excells
All women in the magic of her locks,
And when she twines them round a young man’s neck
she will not ever set him free again.”

“Le vampire” was painted in 1825 by one of the most influential french painters – Eugène Delacroix. As it happens, in that year he spent three months studying English painters.

The title of the work is pretty self-explanatory. Enjoy 🙂

“Love and Pain” was given to the world by Edvard Munch in 1893 and there are six versions of the work created between 1893 and 1895 – most of them currently in museum collections. 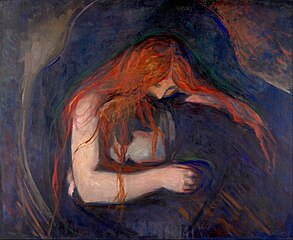 Despite “Love and Pain” being most recognizable in the above version, he also painted derivatives in later life, using various methods.
The painting shows a woman with long flame-red hair kissing a man on the neck, as the couple embrace.

The painting was first called “Vampire” by Munch’s friend, the critic Stanisław Przybyszewski.
He first saw the “Love and Pain” on exhibition and described it as “a man who has become submissive, and on his neck a biting vampire’s face.”

One of the other versions bares the name “Vampyr II” and is actually a woodcut with a very similar theme and composition, created by Edvard Munch in 1985.

Another interesting fact is that a 1894 version of “Love and Pain” was sold in 2008 for an impressive $38.2mil making it the most expensive Munch painting auctioned – to date.