Lady Lilith is an oil painting by Dante Gabriel Rossetti originally painted in 1866 using his mistress, Fanny Cornforth, as a model. At the insistence of shipping magnate Frederick Richards Leyland, Lady Lilith was partly repainted in 1868 using the face of Alexa Wilding.
On 9 April 1866 Rossetti wrote to Frederick Leyland:

As you continue to express a wish to have a good picture of mine, I write you word of another I have now begun, which will be one of my best. The picture represents a lady combing her hair. It is the same size as Palmifera – 36 x 31 inches, and will be full of material, – a landscape seen in the background. Its color chiefly white and silver, with a great mass of golden hair.

The text that was attached to the painting, originally titled “Body’s Beauty” is in sync with that of another painting of Rossetti’s. He later renames the poem to “Lilith”
Find the poem –> HERE <–
Lady Lilith was donated in 1935 to the Delaware Art Museum where it is now displayed.

There are several copies pertaining to the painter.
A large 1867 replica of Lady Lilith – in watercolor and showing the face of Cornforth, is now owned by New York’s Metropolitan Museum of Art. The text that accompanies it is a fragment from Goethe’s Faust:

“Beware of her fair hair, for she excells
All women in the magic of her locks,
And when she twines them round a young man’s neck
she will not ever set him free again.”

The Lamia by Herbert James Draper 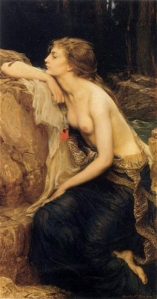 The Lamia is an oil painting by Herbert James Draper, completed in 1909 as part of a series. He focused mainly on mythological themes from ancient Greece – as was the fashion at the time of his prime.

For The Lamia it is believed that Draper used Win Green, a model at the Royal Academy schools.
She is posing in profile, with a snake on her forearm and a snakeskin belt around her lower body.

NOTE: You can easily find prints or hand-made reproductions of this peace as it is a popular one of the artist 😉

The vampire of Birmingham

For those of your that might think the “vampire hysteria” was over in the UK after things went quiet back in the 1970s [referring ofc to the Highgate Vampire incident] I beg to differ and redirect you to an urban legend from back in 2005 that was reported in “The Guardian” as follows;

“A vampire is on the loose in Birmingham. And an inept one at that, if reports are to be believed. Which they aren’t. Last month, this “vampire” went on a “rampage” in Glen Park Road, Ward End. The attacker reportedly bit a male pedestrian and then bit neighbors who came to the man’s aid. One woman had “chunks” bitten out of her hand, according to reports, which feature lots of one-word “quotes” and very little in the way of named sources.
No matter. The Birmingham Evening Mail has been flooded with calls from “terrified” families, community leaders and schools. Oliver Luft of the Birmingham news agency Newsteam reported: “As the sun dips below the rooftops of sleepy terraced streets, residents rush home, quickly gathering up playing children, because after night falls a vampire hungry for blood stalks. Reports of a Dracula-style attacker on the loose biting innocent people has spread terror throughout neighborhoods in Birmingham, causing many to fear the darkness of the night.”
Such reports themselves spread fear. Thus, a spokeswoman for City Road primary school in Ladywood said: “We have had many parents coming in concerned because they had heard somebody has been going around biting people.”
But police in Birmingham have not investigated this “case”. Nor have any hospitals in the city reported treating more than the usual number of hard-bitten Brummies. A police spokesman said: “To date we have not received any reports from people stating they have been bitten and this appears to be an urban myth which is being fuelled by rumors.”

He was generally described as a Somalian man in his mid-20s and as the news hit the national papers, more supposed incidents were reported in Ilford, Newham and Poplar.
As you can expect, the police did try to locate the elusive fiend, especially since worried parents were contacting the schools frantically and people were beginning to watch their step / back. As the medics were not treating anyone for suspicious-looking bites and the man appeared to have the ability to elude capture, the police had nothing to go on and the fever broke in a matter of months.
Thankfully no minister came forward to propose exorcisms and trips to the local cemetery – this time!

In 1985 biochemist David Dolphin proposed that the vampires of folklore may actually have been people suffering from porphyria, a group of rare, largely hereditary blood diseases.
Porphyria is an hereditary disease caused by an anomaly of the metabolism [overproduction and accumulation of the porphyrins or the “purple pigment”].
It is practically a form of septicemia – the toxins build up in the blood and they gradually poison the muscles. As the illness progresses the color of the urine will change, taking shades of red, purple or even brown.
It will pass down from one generation to another in some cases remaining latent. The disease can this way skip a generation or two and resurface in unexpected branches of the genealogical tree.
Presently the illness is completely treatable and the number of cases seems to be dropping, but in the Middle Ages things weren`t as simple!

In those days a porphiric could be easily mistaken for a vampire because of the sensitivity to sunlight. Even mild exposure can cause severe disfigurement. Facial skin may scar, the nose and fingers may fall off, and the lips and gums may become so taut that the teeth project like fangs. It`s only natural that in the terminal stages the ill would leave their houses only at night – just like vampires.
We even find references of blood rituals.
One might argue that, since it is a blood disorder one might need to take the blood of another to replace his own ill blood. I cannot speak for what was believed back then although I do think it is possible that people were convinced that the “vampires” drank blood to sustain their live form.
Porphyria victims don’t crave blood. Drinking blood will not alleviate their symptoms, nor has there ever been a general belief that it would. The blood chemicals porphyria victims need do not survive digestion.
We even have ties between this disease and garlic.
Most of the ill are allergic cu garlic therefore cannot stand it. If you remember my ~Superstitions~ article, I mentioned the fact that priests would distribute garlic during mass to test for living vampires!
Modern medicine explains that the substances that normally make garlic such a great remedy for a healthy organic system, when combined with that of a porphiric can have poisoning effects. Ingestion of garlic first affects the stomach and they often cough it up.

Another interesting fact is that, since porphyria is hereditary, it falls into the idea that vampires returned to feed on their family.
And here I feed the need to add a couple of observations: modern ~Literature~ and ~Movies~ show that the transformation is almost instantaneous [like in “Interview with the vampire”] or that it might take up to a night [like in “True Blood” or “Vampire Diaries”], but the old legends state that sometimes the transformation can take longer. Even years!
So there was enough time for a child to grow and his porphiric gene be activated, or for another child – with an already active gene to be born.
You can therefore imagine the psychological effect a single case of porphyria could have had on a rural community in a village in the Middle Ages. Especially considering that in such a community everybody is related to… everybody.
To that, add the tension created by priests that castes fear into the peasants.

So lets recap:
– paleness
– sensitivity to sunlight
– [sometimes] allergic reactions to garlic
– skin burns if exposed to the sun
– speculations that blood drinking is required to recuperate a healthy state
– [hereditary disease] chain periodic deaths within a family

Although not the first work to present this kind of character, “Dracula” by Bram Stoker was the first novel to truly have success
The creative process wasn`t a spontaneous one, as many would imagine. It took decades to complete the novel, Stoker spending a great deal of time documenting in the British libraries.
The myths may have left their mark on Count Dracula – the character, but the notion of an aristocratic-vampire is a huge step forward! It became the first vampire character that managed to sneak in the collective subconscious, influencing even to this day.
Although Stoker’s vampire summarizes all available superstitions [up to that time], the character in itself brings a new and exciting twist: the undead is of noble origin and retains the title of Count.
The author thus creates a huge gap between the aristocrat Dracula represents and the corpses leaving their tombs at night to feed. The latter behaved more like the zombies in voodoo culture, while Dracula is endowed with intelligence and has other interests outside the “running” after blood.
The Count is able to plan the journey and even counterstrike some obstacles, avoiding difficult situations throughout the story and especially he allows for an evil character to be exposed by the [first] hunter: Van Helsing.

Even his image is a special one. He seems to be endowed in order to seduce his victims.
Traditional vampires used their powers to subdue victims, but Dracula is shown as a courtly gentleman, with good quality clothing – even manages to mimic life for a few days as his lawyer visits him to sign the contract for buying the future home in England.
The general image of a vampire is supposed to be complete with a shroud and / or semi-decomposed clothes, unkempt appearance [hair disheveled, broken nails because of numerous exits from the tomb] and blood – incriminating evidence around the mouth of any vampire.
We rarely find dialogues in the old stories, but we can not put too much emphasis on this because there weren`t so many writers [of short stories and novels] that focused on these issues ahead of Stoker. The classic poems present scenes of vampires and their victims [almost always undead relatives or lovers] without much dialog.
In the legends who inspired Bram Stoker, the vampire is a creature of darkness that shows a lot of negative aspects – that Irish has introduced in the description of Dracula. Associated with the shadows and night, the Church used the vampire to incite fear and it was considered a servant of the devil; the vampire was “kept out of the world by the light of God” during the day.
Unlike other mythological creatures, the vampire did not have duality before the changes made by Stoker! While in other cases demons behaved like normal people while the sun was in the sky [often taking the appearance of a member of the community], and after nightfall their monstrous side would manifest, the vampire spend the day in the cemetery, more precisely in its grave. The night was dedicated to hunting!
Stoker changed certain elements without changing the nature of his character.
Like other vampires, Dracula cann`t move during the day, but neither is he trapped in the cemetery. His coffin travels without major issues from Transylvania all the way to Britain -he even uses of his powers to subdue the will of the crew and changes the environment to his liking [causes fog and storm during the trip]. No other vampire before Dracula was so strong and had so many supernatural powers.
His duality occurs at nightfall, when he is both the courteous aristocrat who commands respect, and bloody and scary vampire, bringing more of an animal.