Hecate as a vampiric deity

You will find info on Hecate all over the internet so I didn`t make a large article on her, I simply provided a basic outline so that you can understand why she has been associated with a vampire deity in so many articles out there.
You will find my personal beliefs in the first comment!

This Dark Goddess has been around for as long as anyone can remember. She was definitely pre-Olympian, and most likely Thracian in origin.
Hecate [or Hekate] is the goddess of magic, witchcraft, the night, moon, ghosts and necromancy. She was the only child of the Titans Perses and Asteria from whom she received her power over heaven, earth, and sea.
The Greek and the Roman pantheons each quickly cleaved her unto their breasts and made it seem, for all intent and purposes, that she was one of their own.
What we do know, is that Hecate existed as least as far back as when the war began between the Olympians and the Giants. 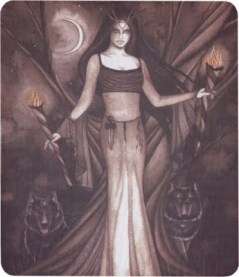 While the other Gods chose to live on Mount Olympus, Hecate preferred to live in the Underworld along side Hypos, Orpheus, Hades and Persephone.
Even though Hecate is sometimes associated with all three phases of the Moon, she is, more often then not, connected with the third stage of the Moon, which is the Dark Moon. For that reason, she takes on the role of the Crone in a typical Triple Goddess formation in which there is a Maiden, a Mother and a Crone.
Hecate and Persephone were polar opposites of each other, and when they left the Underworld to travel up to the Earth, Persephone brought with her brightness and life, while Hecate brought with her darkness, and all of the things that tend to accompany darkness. It was Hecate who met the souls of the dead, and then led them into the Land of the Shades from one of its entrances at Lake Verna.
Hecate’s sacred color was black, and her sacred animals were the toad, a symbol of conception, and dogs; but more often then not, hounds.
Many people believed that Hecate had the ability to control the spirit world, as well as the powers of nature such as birth, life and death.
There is another very important feature which arose out of the notion of her being an infernal divinity: she was regarded as a spectral being, who at night sent from the lower world all kinds of demons and terrible phantoms, who taught sorcery and witchcraft, who dwelt at places where two roads crossed each other, on tombs, and near the blood of murdered persons. She herself too wanders about with the souls of the dead, and her approach is announced by the whining and howling of dogs.

During the early part of the Middle Ages, Hecate`s reputation as the Queen of the Witches grew in power, and she was usually envisioned in the role of a Crone, which role is archetypal of the feminine mystique. A popular belief during that particular period in time was that if these magical women had the power to bring life into this world then, as they aged, they would also gain the power to take that life away.
It was for that reason that Hecate became, in no uncertain terms, the Greek Goddess of Magic, and the connection between Hecate, death and the Underworld continued to grow stronger as time passed by.
Her followers held midnight rituals in her honor at three-way crossroads and she was also believed to roam the Earth on moonless nights, accompanied by her pack of hounds.
There even came a time when people were so fearful of Hecate, that they committed blood-sacrifices in order to remain in her good graces.

Darker still, is the belief that Hecate was the mother of a demonic vampire known as the Empuse [empousa or empusa].
Empusa is therefore the daughter of the goddess Hecate and the spirit Mormo.
It was believed that the daughter of Hecate, came out of the Underworld at night with tremendous bloodlust. According to folklore, she was a shape-shifter that took the form of a beautiful woman to seduce men.
In later Greek mythology, her role was reduced to a species of specter under the control of Hecate. The empusae was believed to be a demonic faction sent by their patron to guard roads and devour travelers